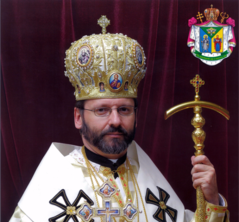 His Beatitude Sviatoslav (Shevchuk), Patriarch of Kyiv-Halych and all Rus’-Ukraine. Father and Head of the Ukrainian Greco-Catholic Church worldwide 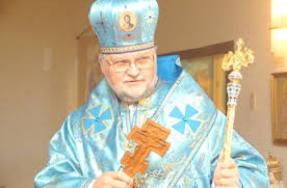 Metropolitan Stefan (Soroka) of Philadelphia, proto-hierarch of the Ukrainian Greco-Catholic Church in the USA

The Catholic Church is a communion of churches, the Roman (Latin) church and various self-governing (sui-juris) Eastern Catholic Churches, all of which are equal in stature.  The UGCC is in full and visible communion with the Holy See of Rome, under the leadership of the Pope of Rome. Eastern Catholics are Orthodox Christians of the East who live in full and visible communion with the See of Rome.  The Eastern Catholic Churches have their own theology, liturgical-sacramental systems, spirituality and canonical traditions.  This diversity is not a weakness, but a gift from God, discernible from the earliest ministry of the Apostles, preaching in a multitude of tongues to the many present on Pentecost.  The one Gospel message was incarnate very early in a wide array of cultures, but the various local Churches remained united in communion with each other, looking to certain apostolically founded sees for guidance and leadership. 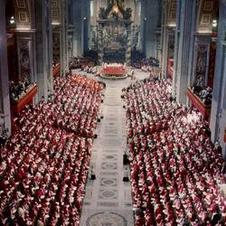 The Second Vatican Council, held in the 1960’s, had many things to say about the Eastern Churches.  Here are a few passages from the teachings of the Council:

“The Catholic Church holds in high esteem the institutions, liturgical rites, ecclesiastical traditions and the established standards of the Christian life of the Eastern Churches, for in them, distinguished as they are for their venerable antiquity, there remains conspicuous the tradition that has been handed down from the Apostles through the Fathers and that forms part of the divinely revealed and undivided heritage of the universal Church.” (Orientalium Ecclesiarum, Decree on the Eastern Churches,#1 Vatican II)

“Between these [Eastern and Western Catholic Churches] there exists an admirable bond of union, such that the variety within the Church in no way harms its unity; rather it manifests it, for it is the mind of the Catholic Church that each individual Church or Rite should retain its traditions whole and entire and likewise that it should adapt its way of life to the different needs of time and place.” (Ibid. #2)

“These individual Churches, whether of the East or the West, although they differ somewhat among themselves in rite (to use the current phrase), that is, in liturgy, ecclesiastical discipline, and spiritual heritage, are, nevertheless … of equal dignity, so that none of them is superior to the others as regards rite and they enjoy the same rights and are under the same obligations, also in respect of preaching the Gospel to the whole world (cf. Mark 16, 15) …” (Ibid.#3)

“Means should be taken therefore in every part of the world for the protection and advancement of all the individual Churches… “(Ibid. #4)

“The Sacred Council, therefore, not only accords to this ecclesiastical and spiritual heritage the high regard which is its due and rightful praise, but also unhesitatingly looks on it as the heritage of the universal Church. For this reason it solemnly declares that the Churches of the East, as much as those of the West, have a full right and are in duty bound to rule themselves, each in accordance with its own established disciplines, … “(Ibid. # 5) 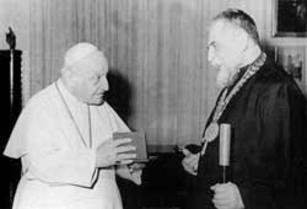 “All members of the Eastern Rite should know and be convinced that they can and should always preserve their legitimate liturgical rite and their established way of life, and that these may not be altered except to obtain for themselves an organic improvement. All these, then, must be observed by the members of the Eastern rites themselves. Besides, they should attain to on ever greater knowledge and a more exact use of them, and, if in their regard they have fallen short owing to contingencies of times and persons, they should take steps to return to their ancestral traditions. “( Ibid. #6)

“Eastern Churches in communion with the Apostolic See of Rome have a special duty of promoting the unity of all Christians, especially Eastern Christians … by prayer in the first place, and by the example of their lives, by religious fidelity to the ancient Eastern traditions, by a greater knowledge of each other, by collaboration and a brotherly regard for objects and feelings.“(Ibid. #24)

In 1996, the Holy See’s Sacred Congregation for the Eastern Churches published a set of Instructions for the implementation of those aspects of the canons that had to do with liturgical-sacramental questions. It is worthwhile to read at least a brief quotation from that document.

“In every effort of liturgical renewal, therefore, the practice of the Orthodox brethren should be taken into account, knowing it, respecting it and distancing from it as little as possible so as not to increase the existing separation, but rather intensifying efforts in view of eventual adaptations, maturing and working together. Thus will be manifested the unity that already subsists in daily receiving the same spiritual nourishment from practicing the same common heritage.”[26] (Sacred Congregation for the Eastern Churches: 1996 Instructions for the Liturgical Implementation of the Canon Law of the Eastern Churches, III)

“The Sacred Council feels great joy in the fruitful zealous collaboration of the Eastern and the Western Catholic Churches and at the same time declares: All these directives of law are laid down in view of the present situation till such time as the Catholic Church and the separated Eastern Churches come together into complete unity.” (Orientalium Ecclesiarum, Decree on the Eastern Churches,#30 Vatican II) 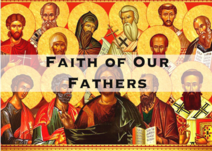 Theologically, Eastern Christians tend to think in terms that are more synthetic and intuitive rather than analytical. We usually prefer paradox (antinomy) to the “precision” of some philosophically-based thought, but that does not mean that our theology is fuzzy. It is experientially focused, anchored in the living Tradition of the Church.

We pay great attention to all of the elements of Holy Tradition: Scripture, Church Councils, Fathers of the Church, Liturgy, Hagiography, Iconography, etc.

As Eastern Catholics we often face the question of how we reconcile our Orthodox and Catholic loyalties. This is an area that is still being worked out in light of the teaching of the Second Vatican Council on the fact that the Eastern Catholic Churches have their own theology. Some of us would express it thus: we hold Orthodox positions on all theological matters, except when they are in conflict with the expressed teachings of the Holy Roman See. In that case, by virtue of the full and visible communion that exists between our Church and Rome, we cannot ignore the Roman teaching on a given subject, but must find a way to reconcile positions.

It is in the very structure of our Church as a self-governing Church within the Catholic Communion that we first see the seeds of Church particularity. The various Eastern Catholic Churches are to govern themselves in a way that allows for the gospel message to be preached more effectively and the Kingdom of God to be established more solidly in the lives of the faithful. In the case of the Church of Kyiv that means a Church governed by the Synod of Bishops drawn from both Ukraine and the diaspora, and chaired by its Father and Head, the Patriarch of Kyiv-Halych and All Rus’-Ukraine.

There are many more issues in which the distinctive canonical tradition of the Kyivan Church comes through. One of these is the ordination of married men to the priesthood. While priests never marry, most of the Eastern Churches have preserved the ancient divinely instituted apostolic tradition of married clergy. Jesus chose married men as his apostles. Our Lord cured Peter’s mother-in-law (and there is only one way to get a mother-in-law!)

The Roman Church also practiced the ordination of married men to the priesthood until the eleventh century, but ceased at that time for various reasons, and instituted universal enforced celibacy. The Eastern Catholic Churches decided not to follow this Western innovation. In the Ukrainian Catholic Church there has always been a great respect between the monastic clergy who are celibate and the parochial clergy who are by vast majority married.

Our liturgical tradition is based on the experience of the beauty and glory of God’s plan for us. Our ancestors in the faith long ago decided that it was through worship and beauty that the True God was found. The Story of the Conversion of Rus’, as related in the Kyivan Primary Chronicle, focuses on this reality. 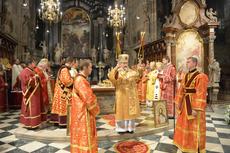 Volodymyr, the ruler of Kievan Rus’, sent out emissaries to find true religion. They went throughout the world and tested various faiths, but reported to their ruler that they had found no glory, … until they arrived in Constantinople. When they returned to Kyiv the emissaries reported to the Prince what had happened there in the great Cathedral of Holy Wisdom — the Haghia Sophia.

“They took us where they worshiped their God, and we did not know whether we were in heaven or upon earth, for there is not upon earth such sight or beauty. This much we do know, that there, God lives among men, and we can never forget that beauty…”

St. Volodymyr accepted Christianity in its Orthodox or Byzantine (Constantinopolitan) form for himself, his boyars (courtiers) and his people, who were baptized in 988. It is through beauty and the glory of God that we still primarily relate to the Lord. Our services are sung and they are never rushed. Even in a tiny parish such as ours, great care is taken to try to preserve and promote beauty and depth in our liturgical life. However, it is really God who acts in liturgy. At a certain point we simply need to get out of His way.

The Spirituality of the Kyivan Church has been characterized as particularly kenotic. Kenosis is a Greek term that refers to the self-emptying of Christ, who “did not think equality with the Father something to be grasped at” but rather humbled Himself, becoming one of us (see Philippians 2:5-8).

The first saints to be canonized in Kyivan Rus’ were two sons of Prince Volodymyr, Borys and Hlib. They were murdered by their brother, who apparently saw them as potential rivals for the throne of Kyiv (Kiev). The two princes had an opportunity to defend themselves, but sent their military retainers away, preferring not to raise weapons against their brother, and accepting an unjust death. The newly Christian populace saw in these victims a clear echo of the self-sacrifice of Christ.

Throughout the tragic history of the next ten centuries many opportunities would present themselves for self-sacrifice and non-violence amid a people who had heard the Gospel message of the meek inheriting the earth. In the twentieth century, this same church went through its bloodiest and most woeful persecution at the hands of the Bolshevik regime of the USSR, only to rise again in unprecedented glory as that government rotted away. When this Church was decriminalized in the Soviet Union on December 1, 1989, it had some three hundred clergy left, with an average age of about 75.  Three decades years later, this Church has 3000 priests in Ukraine, with an average age of 36.

Living in the midst of a post-modern secularism in North America, there should be nothing triumphalistic about the approach of our Church to the questions of the day. We are sinners in a world of sinners. The only difference between us and those who do not bother with the things of God is that we know that we are sinners… and that for some reason God loves us.

Lord, Jesus Christ, Son of God, have mercy on me, the sinner. 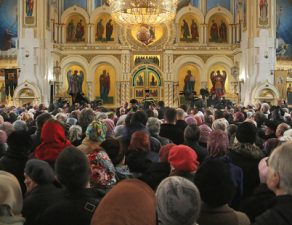 In the Eastern Church, reverence and adoration is expressed differently than what Roman Catholics are…